The newest technology in laser hair removal products has proven to be highly effective compared to older methods. Some of the top brands in the industry are now competing to make products that are not only convenient to use, but offer the user with a smooth and simple process to remove unwanted hair.

Two of the top laser hair removal products currently available are the Silk’n Infinity and the Tria 4x. While these two models operate using different methods to deliver laser lighting, both have shown to be more than capable of removing hair in a way that is less intrusive than older products, as well as easier and more effective than laser hair removal technology was just a few years ago.

Taking a closer look at both the Silk’n Infinity and the Tria 4x, it’s easy to see why so many consumers are deciding to purchase and use them over the many other options that are currently out on the market. When it comes down to the question of which product is the better of the two, that can be a bit tougher to determine.

The Silk’n brand name is synonymous with the best of the best products when it comes to laser hair removal. The company has been in the industry for more than a decade and has designed some of the most functional and effective models of anyone in the beauty industry.

The Silk’n Infinity is wildly popular with users of all age ranges and skin colors thanks to the fact that it utilizes IPL technology to deliver highly effective light beams to the user’s skin in a way that removes hair and also beautifies skin at the same time.

IPL stands for intense pulsed light and is one of the latest types of laser hair removal technology in the beauty industry.

It uses a scattered bunch of light beams that spread out across the surface of the user’s skin, pulsating at a very rapid rate to penetrate deep into the user’s pores and damage the root of the hair follicle in a way that prevents future growth and leaves the pore opened and better able to receive moisture and other healthy components.

While the Silk’n Infinity is not a cordless product, it is relatively compact compared to other models and many users report that it is simple and easy to use on any area of the body.

It is advertised as being able to deliver up to 400,000 light pulsations, which is much greater than most other products of similar nature on the market today.

The Tria 4x operates using a diode laser, which is the same technology utilized in many professional saunas and spas across the country. It’s been FDA approved and functions by illuminating the hair follicle at such a high rate that it hampers or completely eliminates any future growth in the hair follicles that are affected.

The diode laser method is also very popular with dermatologists and the Tria 4x is one of the most highly rated at-home products that utilizes this same technology as a means to remove unwanted hair. This method delivers more than three times more energy into the skin than other methods, making it extremely effective.

The Tria 4x is made with a cordless design, which allows the user to more easily twist and turn it as needed to treat certain areas of the body. It is a rechargeable device, but once the laser charge on the inside of the product runs out, you’ll end up having to purchase an entirely new model instead of simply replacing cartridges in the same way other products operate. 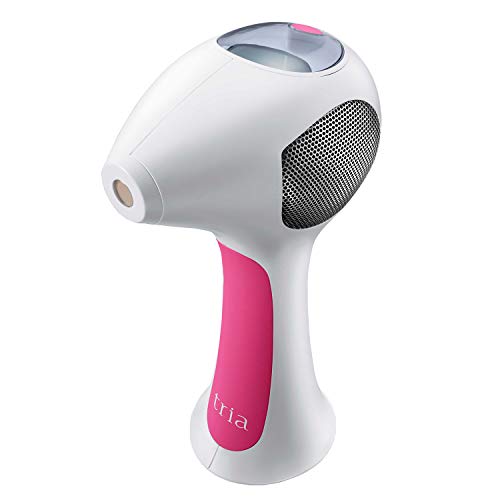 Both products are known to be among the best and most effective laser hair removal models available in 2021, but there are some striking differences in the way that the Silk’n Infinity and the Tria 4x operate.

The newest model of the Tria 4x offers 5 different power settings which users report being very easy to switch between depending on your personal preference.

Many users report that there is some level of discomfort when using the Tria 4x that can be comparable to being ‘popped’ with a rubber band or something similar, but the sensation is not unbearable. While the higher powered settings will result in a higher level of discomfort, users find that the lower settings are much more tolerable.

The Silk’n Infinity’s use is much more comparable to that of a warming sensation than anything else and is often much more preferable to that of the Tria 4x. It does leave a slight ‘burning’ sensation, but users report that this feeling dissipates almost immediately after the product has passed over the area.

When comparing the Silk’n Infinity to the Tria 4x, users overwhelmingly advocate that the Infinity is the least-painful of the two models.

When it comes down to the question of which product delivers better results, the Tria 4x seems to be the better choice for most users. While it does offer a bit more discomfort and a smaller treatment area, you’re much more likely to achieve better results with the Tria 4x than the Silk’n Infinity. However, the Silk’n Infinity is more affordable and is also highly effective in it’s own rite, making it almost as appealing depending on your own personal preference and budget.

Who doesn’t want dreamy hair? We all do! But as seasons change or we get busier in our lives, our hair becomes either...

How Will Gyms Bounce Back After COVID?

This post is sponsored by Superior Farms American lamb. In our family, it’s a tradition...

Why It’s Good To Carry A Water Bottle

Why it’s good to carry a water bottle. Over the past two weeks we’ve been enjoying an amazing spell of incredible weather. Sunshine and...

quick and easy natural look for the day :)

Feel Slimmer Today And Enjoy your clothes now, not tomorrow

NEWA skincare device – how to use it

New to Makeup, Trying to Figure Out Basics (See comment)

What is leaky gut? – The Pai Life

What to Say to Someone Who Lost a Loved One