Spring Growth in the Gardens Around My Greenhouse


Spring Growth in the Gardens Around My Greenhouse

The gardens at my Bedford, New York farm continue to show off beautiful spring growth.

The areas around my greenhouse are filled with shade-loving plants – ferns, Syneilesis, Podophyllum, Epimediums, hostas, Trollius, and more. I’ve worked hard to develop these spaces, planting interesting groupings of varying foliage, texture, height, and form. These garden beds continue to be works in progress, but so far, I love how they look.

Here are some photos, enjoy.

This area is across from my gym building and outside my main greenhouse. It is one of the first gardens one sees when visiting my farm. Under the dappled shade of the trees, this area and the gardens nearby are showing off some beautiful early spring growth. 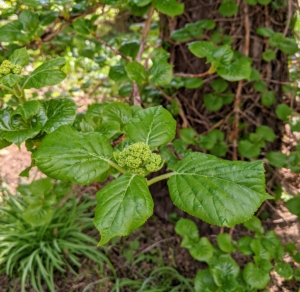 Near a corner of the greenhouse, I have a stand of white pine tree trunks that were left after the actual trees were battered beyond saving during Super Storm Sandy. I would have cut the trees down completely, but I had nurtured climbing hydrangea vines on them for several years and did not want to lose them. They are still thriving today on these trunks. 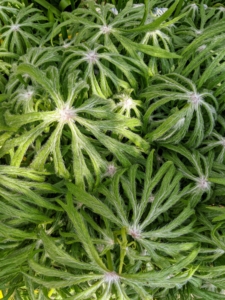 Syneilesis aconitifolia, commonly called shredded umbrella plant, is an herbaceous perennial of the aster family that is native to hillside forest margins and slopes in China, Korea, Japan and eastern Russia. I am so fond of the foliage. The leaves are narrow, dissected, and cascade downward like an umbrella. Emerging foliage is covered with a unique white fur. White flowers on mauve pink calyxes will tower above the foliage midsummer. 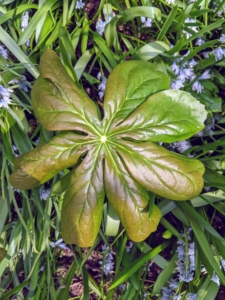 Another favorite in this garden is Podophyllum peltatum – commonly known as mayapple, American mandrake, wild mandrake, and ground lemon. Mayapples are woodland plants, typically growing in colonies from a single root. I have lots of mayapple growing here. The palmately lobed umbrella-like leaves grow up to 16-inches in diameter with three to nine shallowly to deeply cut lobes. The plants produce several stems from a creeping underground rhizome. 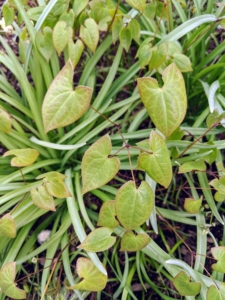 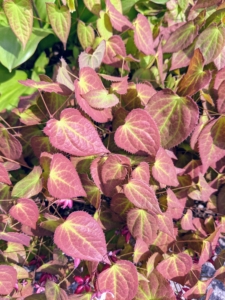 Some Epimediums are tinted red in spring and bronze in fall and winter. 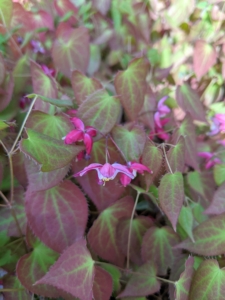 Sprays of white, pink, yellow, orange, or lavender flowers appear this time of year. And, some Epimedium blossoms look like miniature columbines or tiny daffodils, while others appear more like spiders or stars. Species with long sprays can even resemble orchids. 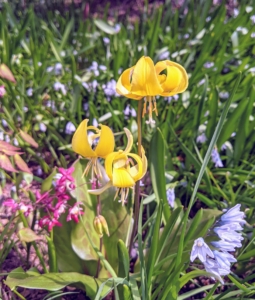 This trout lily is ‘Pagoda Dogtooth,’ It produces up to 10 clustered, 12-inch arching stems that bear yellow, nodding flowers with reflexed petals. 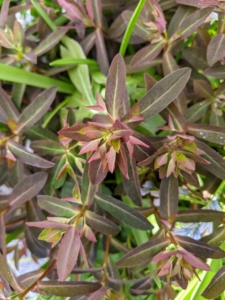 Euphorbia is a very large and diverse genus of flowering plants, commonly called spurge. There are many varieties of Euphorbia plants, with fascinating forms that range from shrubs, herbs, or cactus-like specimens. Euphorbias are valued for their whorled leaves, with colors ranging from bluish-green to variegated green colors all the way to dark bronze-purple. 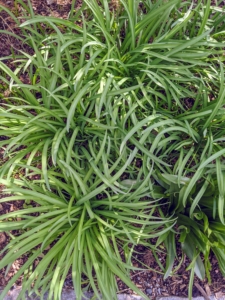 These are the strap-shaped leaves of the bulbous perennial, Allium unifolium. Soon, we’ll see its rounded umbels of pale, rose-pink, star-shaped flowers. 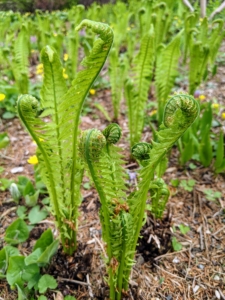 I also have lots of ostrich ferns growing nearby. Matteuccia struthiopteris is native to North America. Once established, these grow to a height of three to six feet. Ostrich fern grows in vase-shaped clumps called crowns. The showy, arching, sterile fronds are plume-like and reminiscent of the tail feathers of – you guessed it – ostriches. 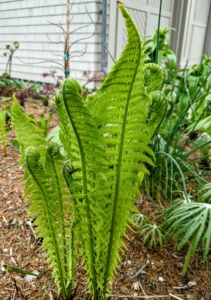 Fiddleheads are the first ostrich fern shoots to show in the spring and are so called because of their resemblance to the neck of a fiddle. These fiddleheads are also edible and have a sweet taste similar to asparagus. 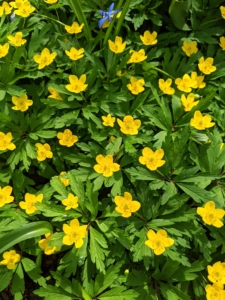 Trollius europaeus, commonly known as common globeflower or European globeflower, is a clump-forming perennial of the buttercup family. It features spring to early summer blooms of globular lemon-yellow flowers atop sparsely-leaved stems. 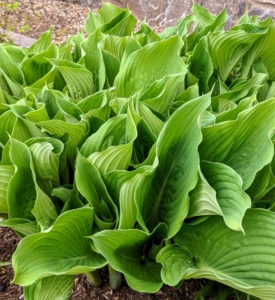 The hostas are also growing quickly. Hosta is a genus of plants commonly known as hostas, plantain lilies, and occasionally by the Japanese name, giboshi. They are native to northeast Asia and include hundreds of different cultivars. I have hundreds of hostas here at the farm – many of which were grown from bare-root cuttings and stored in my cold frame before they were planted. 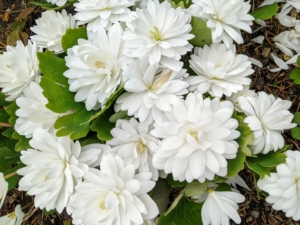 Sanguinaria canadensis, bloodroot, is a perennial, herbaceous flowering plant native to eastern North America. This one is a double-flowered bloodroot variety with perfectly formed balls of pure white flowers atop bold green leaves. 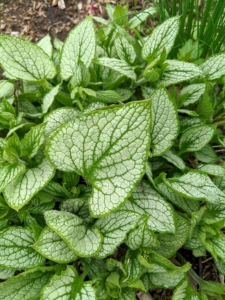 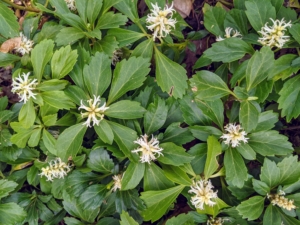 And many of you will recognize pachysandra. Pachysandra is a popular ground cover plant used under trees, or in shady areas with poor or acidic soil. In spring, it blooms with sweet, subtle white flowers. 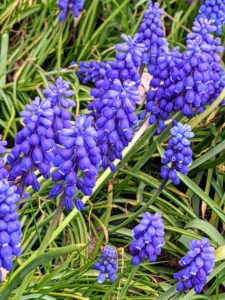 I also have more muscari flourishing in this area. These cobalt blue flowers grow to about six to eight inches tall. Muscari is better known as grape hyacinths, which have tight clusters of fat little bells with a grape juice fragrance. Muscari bloom in mid-spring, and deer and rodents rarely bother them. 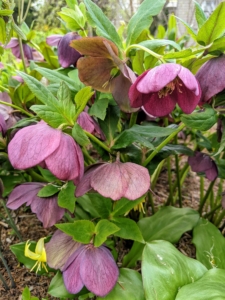 The hellebores continue to show beautifully at the farm. Hellebores are members of the Eurasian genus Helleborus – about 20 species of evergreen perennial flowering plants in the family Ranunculaceae. They blossom during late winter and early spring for up to three months. Hellebores come in a variety of colors and have rose-like blossoms. It is common to plant them on slopes or in raised beds in order to see their flowers, which tend to nod. 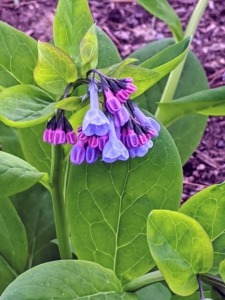 In another area, the Mertensia virginica is also starting to bloom. Virginia bluebell is a spring ephemeral plant with bell-shaped sky-blue flowers, native to eastern North America. 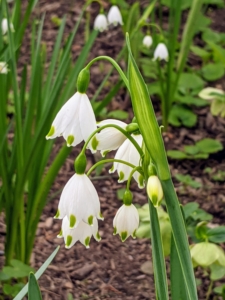 Leucojum vernum, or the spring snowflake, is a perennial plant that produces green, linear leaves and white, bell-shaped flowers with a green edge and green dots. The plant grows between six to 10 inches in height and blooms in early spring. 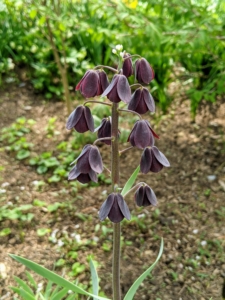 And this is Fritillaria persica, commonly called Persian lily – a bulbous and delicate perennial of the lily family that is noted for producing attractive racemes of plum purple to gray green flowers in spring. Each raceme contains up to 30 conical, nodding, bell-shaped flowers atop a stiff, erect stem rising up to three feet tall. There are so many beautiful flowers and plants growing this time of year – what is growing in your garden? Share your comments with me.

DO YOU WANT NATURALLY ANTI-AGEING SKIN ? A GREAT ANTI-AGEING TOOL WHICH IMPROVES YOUR FACIAL SKIN EFFORTLESSLY WITH THIS JADE ROLLER. It is also...

If you had the power to make your life better in just 30 seconds, would you use it? Well, that power is yours....

How To Grill Chicken In Easy-to-Follow Steps

Perfectly grilled chicken — crusty on the outside, and moist and juicy on the inside — is a great addition to any picnic,...

As we’re in the middle of the global pandemic, it shouldn’t surprise you at all that millions of people are struggling with their...

What Is SAQ Training? | Chuze Fitness

How to Get Rid of Stubborn Belly Fat

How Gratitude Improves Your Nervous System

Post-Pandemic Life: What To Expect & How To Deal

Joy Is a Nutrient (and the Best Beauty Trick, Too)